Is there anything that invokes the Christmas spirit more than the twinkling lights and wooden huts of a traditional Christmas market? Okay, there are plenty of things (actual Christmas, for a start), but the markets that fill up the town and city centres of continental Europe throughout December are definitely a signifier that Santa is on his way.

The markets originated from the German-speaking world, and the mixture of glistening lights, traditional food and festive cheer is a staple from Tallinn all the way down to Zagreb, and everywhere in between. Our guides cover many of the finest Christmas markets on the continent, and here are 11 of the best.

You don’t get voted ‘Best Christmas Market’ for two straight years without at least being deserving of some serious acknowledgment. That honour belongs to the Croatian capital, and it is easy to see why Zagreb has swept the presumably-mythical ‘Christmas Market Oscars’ for two straight years. The ice park on King Tomislav Square is deserving of every ‘magical’ adjective thrown its way, and the various advent and nativity scenes take some beating.

From one of the best to one of the oldest, Vienna has held some form of festive market in its city centre since 1298, a full 694 years before In Your Pocket first published a guide. The Austrian capital is an enchanting city even on its worst days, and it is fair to say that ‘worst’ is not a word that comes to mind when describing the modern Christmas Market. Vienna’s City Hall is a romantic setting as you could hope to find for some festive cheer.

Speaking of romance, the Czech capital is accurately considered to be one of the most romantic cities on the continent. The festive season takes over the majority of the squares of Prague, and the atmosphere in the city is clearly focused on the cheer to come as opposed to short-term enjoyment. Prague is the place to go to be enveloped in the entire festive season.

Surely one of the northernmost Christmas markets on the planet, the history of yuletide cheer here goes way back to 1441, the year in which the first evergreen conifer was erected in the town, one of the earliest examples of what we now know and love as the Christmas tree. It was set on fire all those years ago, but you’ll have to make do with snow and lights in the 21st century. 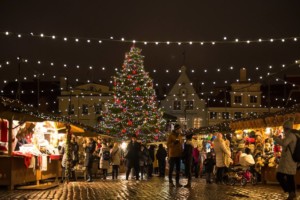 From an adorable capital in the north to one a little further south, Ljubljana’s Festive December has its sights set firmly on the future as opposed to the past. The city’s main square may well be the only festive market on the planet to feature neon sperm, and no that is not a joke. Somehow, it works.

The idea of the Christmas market originated in the Germanic world, so we would be remiss to wax lyrical about yuletide celebrations without dipping into modern day Deutschland. There are almost a hundred markets in and around the capital so there is plenty of choice, but the one at Gendarmenmarkt may take the prize for the finest. A newspaper referred to it as the ‘Mercedes S-Class’ of Christmas markets. High praise indeed.

Krakow and Christmas (Krakmas? Chriskow?) go together like heat and beer, unless you aren’t a fan of such things of course. Gingerbread houses, candy canes and the jingling of sleigh bells mesh with one of Europe’s finest city squares to create an unforgettable festive experience, although that depends on your ability to keep stock of your ‘grzane piwo‘ (hot beer) intake. 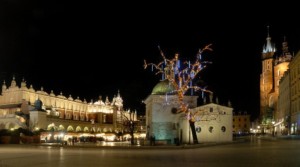 The Belfast Christmas Continental Market stars on our latest cover, as it returns to the sparkly grounds of Belfast City Hall with its festive array of ostrich burgers, craft brews, handmade gifts and Santa’s Grotto.

Sure you couldn’t beat it with a big stick. 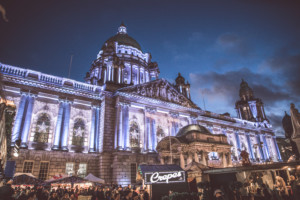 Although Christmas markets are a relatively new concept in Riga, Latvia’s capital now has three of them. The most charming and authentic is located in the shadow of Riga Cathedral in the old town and not only provides dozens of stalls selling local crafts, gingerbread cookies and mulled wine but also sports a post office, so you can send old fashioned postcards to your friends, a cat hotel, which is as odd as it sounds, a stage for live bands and even a small petting zoo filled with sheep. The markets spread holiday cheer from December 1 – January 8. 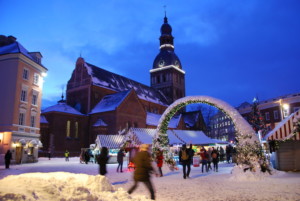 The snow is falling in Budapest this year, something we haven’t seen for a while. Thus, the wooden stalls and fir trees of the Christmas markets will look as picturesque as can be. There are two main Christmas markets, with smaller concerns dotted around the city. The work of genuine craftspeople is showcased at these markets, and at either market you can take a break from retail therapy to load up on Hungarian delicacies such as Kürtőskalács – the stacked “chimney cake”. To really warm the blood, a shot of Pálinka (Hungarian schnapps) or mulled wine seldom goes amiss.

The Gdansk Christmas market’s biggest pull is its location set on the cobbled square of the Coal Market in the shadow of some of the city’s most picturesque buildings – the Prison Tower and the Armoury. When the whole place is lit up it’s a truly wonderful sight and we can only hope for a bit of December snowfall to really give it that Christmasy feel. 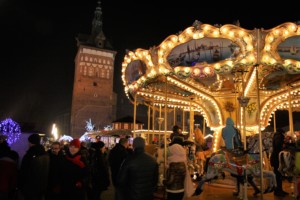 And last but not least, there’s the capital of Lithuania and the birthplace of everyone’s favourite publishers of locally produced travel guides, ie In Your Pocket, that’s right: Vilnius! It’s five unforgettable weeks of winter holidays, where the variety of festivities and pleasant Christmas surprises in the capital make Vilnius the true Christmas capital. 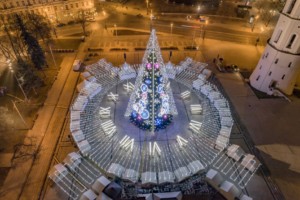 There’s plenty more where that came from of course and you’ll find some tips for New Year’s Eve here.  Be sure to follow our various social media accounts (Facebook, Instagram, Twitter) for all the latest in the world of travel and tourism, and let us know where you decide to go. Merry Christmas, one and all!