Let’s just take a moment to appreciate that alliteration. If we continue telling ourselves that summer is right around the corner then it might become reality, but we may have to make do with closing our eyes tight and thinking of warmer temperatures to get by. It’s never too early to plan a summer getaway however, and many among you will be torn between a beach holiday or a city escape. Why not both? These sunny summer cities offer all sorts of coastal culture, as well as affording us the opportunity to bust out a little more alliteration.

A three-for-one! Everyone loves ‘a buy one get two free’ deal, and that is what you got on the balmy Baltic coast of Poland. Gdańsk, Gdynia and Sopot are three delightful spots in their own rights, but the trio come together like some sort of strange Baltic Power Ranger to offer one of the most comprehensive seaside experiences on the continent. It was in Gdansk that the first cracks in the Iron Curtain appeared, Sopot was the summer home of the Kaisers in imperial times, and Gdynia owes its entire existence to the return of Polish independence following World War I. 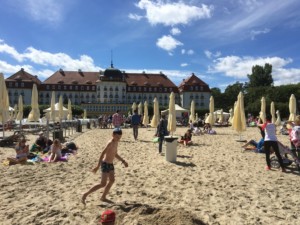 Search for accommodation in Sopot, Poland

Slovenia might not have a huge amount of coast, but it sure does cram plenty into its 47km of seaside space. Koper, Izola and Portorož all have their charms, but few argue against Piran (as pictured in the feature image) being the Slovene seaside main event. The town spreads out around Tartini Square, named after the famous composer Guiseppe Tartini. Ol’ Beppe was born in Piran, and the Adriatic town has continued a proud legacy of music in the near 250 years since Tartini’s death.

Just down the road from Piran lies Trieste, a Slovene town in history but one that very much marches to the beat of the Italian drum in the 21st century. Trieste offers plenty of sea, but its castles, cuisine and culture are just as enthralling. The centuries of Austro-Hungarian rule left their mark, and the city is now a veritable playground of history and conversation.

Tallinn really does offer everything to the prospective visitor. Not content with being one of the prettiest capitals in Europe, the biggest city in Estonia may just boast the finest ‘museum to sea’ ratio around, although we’re pretty sure that isn’t a ratio that anyone has actually measured. Everything that makes Estonia great can be found in its seaside capital, and the 100th anniversary of Estonia’s independence makes 2018 the perfect time to visit. You can even see Helsinki across the Baltic, if the weather is clear and you have remarkably good eyesight.

Tours and more in Tallinn, Estonia

Sticking with the Baltic, Klaipeda isn’t known as the ‘Party Port’ purely for the alliteration. The finest restaurants and cafes on the eastern Baltic coast are found here, in the gateway to the Lithuanian Riviera. If you didn’t know that the Lithuanian Riviera was a thing, now is definitely the time to discover it.

Search for accommodation in Klaipeda

Dubrovnik might get all the press and all the attention and all the lucrative Game of Thrones shootings, but does it have a palace that acted as a retirement home for an emperor? How about some of the finest galleries in all of Dalmatia? A museum dedicated to frogs? Okay, that last one isn’t so wonderful, but Split is without doubt the thinking person’s Croatian seaside town.

Along with being a really fun word to say, The Black Sea coastal town of Burgas is widely known to be the best place to live in Bulgaria. The vast expanse of water will have plenty to do with that, but there is more to this place than meets the eye. The area around Burgas is full of fascinating archeological findings, and the city itself has a number of fine museums. Be sure to pick up a rental car and make the most of both.