Zagreb’s Layout – A Journey Through a Layered Cake of Neighbourhoods

Every large city has neighbourhoods. They develop distinct characters and as soon as a micro location grows a life of its own, they begin attracting more of the same. Buzzy market stretches, artsy strips, revamped industrial quarters, cozy green outskirts… The more they come into their own, the more attractive they get. Nowadays travelling to metropolitan centres such as London, New York or Paris is unthinkable without getting to know their ‘’hoods’.

Zagreb too has a peculiar neighbourhood layout. We differentiate the west from the east side of Zagreb. We mark off Novi Zagreb [New Zagreb] from the city’s historical core. We think of the Upper Town as the jewel in our crown. It’s difficult to see these boundaries on a flat map. But if you switch to a three-dimensional view, you’ll notice something quite amazing. Zagreb actually looks like a layered cake. With one caveat: the city was ‘assembled’ from the top down.

Icing on the cake
Most people approach Zagreb from the south and immediately notice Medvednica mountain filling its horizon. Medvednica is a nature park but some areas at its foot are leafy residential neighbourhoods. We call them the “Podsljemenska zona” [under the Sljeme hilltop zone]. Those closest to the mountain have preserved a true village atmosphere. But at the opposite end, amidst the Tuškanac forest, Zagreb hides its most opulent district – its cottage neighbourhood.

Several small hills, such as Tuškanac, Pantovčak, Kraljevec and Zelengaj, belong to this exclusive club. Aside from lavish houses, including a number of diplomats’ residencies, there is little here that disturbs the pristine greenery. Pero Kvesić, renowned writer and Tuškanac local makes this point with a few interesting numbers. ‘From the statue of Miroslav Krleža (a few hundred meters off Ilica) to Šestine village (6 km north towards Medvednica), there is only one café, a grocery store, a school and a medical centre’, says Pero. ‘Only 3,000 people live here – almost 20 times less than in the Lower Town, which is roughly the same size.’

Zagreb’s cottage neighbourhood developed in the early 20th century together with a new class of rich industrialists. They spread out to areas that were once orchards, vineyards and meadows serving the population of the Upper Town. Many villas were designed by esteemed Zagreb architects. Rokov perivoj, for example, is a beautifully laid-out micro location and the brainchild of architect Viktor Kovačić. This green hill boasts only a few villas that blend in with the landscaped surroundings.

When you roam through the semi-wild Tuškanac forest Zagreb becomes a different city. And the entrance to this magical neighbourhood is just off the main Ilica street – either from Dežman Passage or Britanac Square. ‘During sweltering summer days, Tuškanac forest infuses Zagreb with a breath of fresh air’, Pero tells me. ‘Once in a while, everyone should escape the urban bustle and enjoy the luxury of a long walk so close to the centre.’

TIP: Look for Dubravkin put [Dubravka’s trail] that begins north from Dežman Passage and follow it along to the beautiful Cmrok meadow.

Let’s not forget the Upper Town – Zagreb’s historic seat – that was first mentioned in the 11th century. Its layout has changed little since then although the oldest buildings date back to Baroque times. Today, few people live in the Upper Town, but there is hardly a tourist who is not touched by its mystical charms. So, the icing on the cake came first: made of melted chocolate, spun sugar and roast almonds. 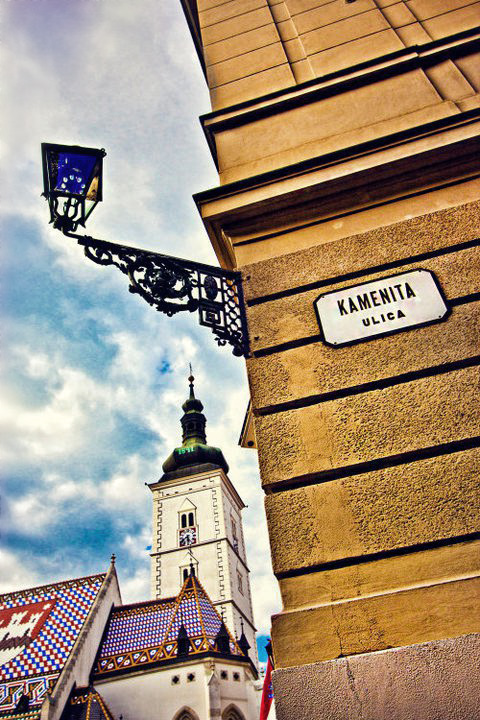 Chocolate sponge
Is there anyone in the world who doesn’t like chocolate? Or at least who doesn’t think of it as a premium treat? Some indulge in it from time to time, others are chocolate addicts. This is a perfect metaphor for the Zagreb neighbourhood that the locals call the Centre. Around 5% of Zagreb’s inhabitants live here, but almost everyone visits it on a daily basis. Street artist Lunar who grew up in the Centre tells me: ‘The Centre isn’t a classic neighbourhood because it has no clear boundaries – it’s a place where everyone is going to and from’.

When it comes to hanging out in the Centre, the border between the Upper and Lower Towns disappears. People flock to the Centre to run errands, go out with friends or do the shopping. And on that route, they will include many places that are officially not part of the Lower Town. Lunar remembers Tkalčićeva and Opatovina streets or Strossmayer Promenade as the best places to hang out with friends. And now decades later, Zagreb tourists discover these stretches as the most attractive parts of the city.

The Lower Town was largely built at the turn of the 19th century. Its elegant streets are lined up with trees and rows of graceful Austro-Hungarian buildings. This is where the locals stroll in parks or linger with friends at café terraces. Tourists are drawn to the Green Horseshoe (a unique network of parks) or the charming Flower Square. But apart from lying on the main sightseeing route, this part of the Centre is a vibrant mixing ground. It’s where travellers stand the biggest chance of rubbing shoulders with Zagreb residents.

There is something else that sets the Centre apart. As the daily port of call, it’s inscribed in people’s memories, especially those from childhood. Lunar recalls ‘Bogdan Ogrizović’ library where many children cultivated their reading rituals. ‘I also remember going to the school of foreign languages in Varšavska and many other streets where my school friends lived’, he says. But if this part of Zagreb belongs to everyone, I ask Lunar, what makes you ‘the kid from the Centre’? ‘Knowing every building, every inner courtyard and hidden shortcut’, he replies.

TIP: The Centre’s east and west side also have distinct characters. Visit the area around Martićeva street (east) that has grown into a hip design district with a namesake festival taking place in June every year. Britanac Square (west) hosts a daily farmers’ market. Visit on weekends when fruit and veg give way to the famous antiques fair. 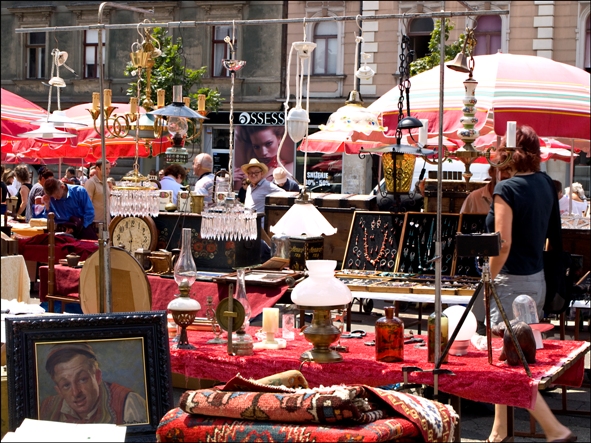 Vanilla sponge
Some say that people come as chocolate or vanilla personalities. I’d say that loving chocolate is easy, almost mainstream. Vanilla lovers are fewer, slightly quirkier but 100% devoted to their flavour. The same goes for the Zagreb locals who live in Novi Zagreb. Well known Zagreb tourist guide Iva Silla enjoys her neighbourhood Siget and even takes tourists there to show them ‘the real Zagreb’. ‘People immediately get put off by the sight of the concrete high-rises of Novi Zagreb’, she says. ‘But once they experience the sense of community behind these grey buildings, they understand why the locals love it here.’

The boundary between the old and the new Zagreb is hard to miss. For centuries the river Sava was the southern edge of Zagreb. Then in the 1950s, and headed by the visionary mayor Većeslav Holjevac, the city started to spread out. New residential areas were green and spacious and each block included parks, schools, shops, cafés, hairdressers – in a word, all the essentials for a quality of life. No wonder that the locals feel so rooted here.

Sandwiched between the Centre and the river Sava is Vrbik neighbourhood, where a similar sense of place exists. American writer and teacher Cody Brown has lived here for several years because ‘it’s a 20 minute walk into town, but far enough that it feels open and slower paced’. Cody is fascinated by the socialist architecture of Vrbik, especially the famed Rakete [Rockets] buildings. And though he always suggests to travellers that they include Zagreb socialist heritage in their itinerary, his reason for living here is something else: ‘It was a fluke that we ended up here, but once we put down roots, made friends and formed a connection with the community, it was hard to move’.

The real Novi Zagreb south of the river Sava began as a sprawling network of residential areas. True, most buildings are socialist skyscrapers which to outsiders seem faceless and all the same. But Iva Silla thinks differently. ‘People here have such a strong bond with their neighbourhoods that they even nickname buildings’, she says. Apparently there is the ‘Super Andrija’ building in Siget while the fabled ‘Mamutica’ [Mammoth] – the largest apartment block in this part of Europe – is fondly called ‘Daisy’.

Today’s travellers are beginning to discover the Novi Zagreb attractions. The Museum of Contemporary Art in the Središće neighbourhood is one such highlight. Nearby is Bundek lake and park with one of the largest children’s playgrounds in town. Iva also recommends exploring lesser known sights, such as the unique pavilions inside the Zagreb Fair grounds, Hrelić flea market or streets murals painted by world renowned graffiti artists.

TIP: Walk along the north Sava riverbank – the favourite trail for Zagreb runners – and see a series of unique sculptures lined up along it.

The fillings
When we talk about city neighbourhoods, we usually talk about borders and boundaries between them. But in Zagreb, we have cake layers, and no matter how distinct they are, they need something to keep them together. That something is the filling. Zagreb cake has a green and a blue filling. Looking from the top down again, Medvednica mountain merges with the old Zagreb through Tuškanac forest and other leafy trails. And Novi Zagreb is the base held together by the river Sava. So, there – the cake is now done. It’s your turn to take a bite and fill up. 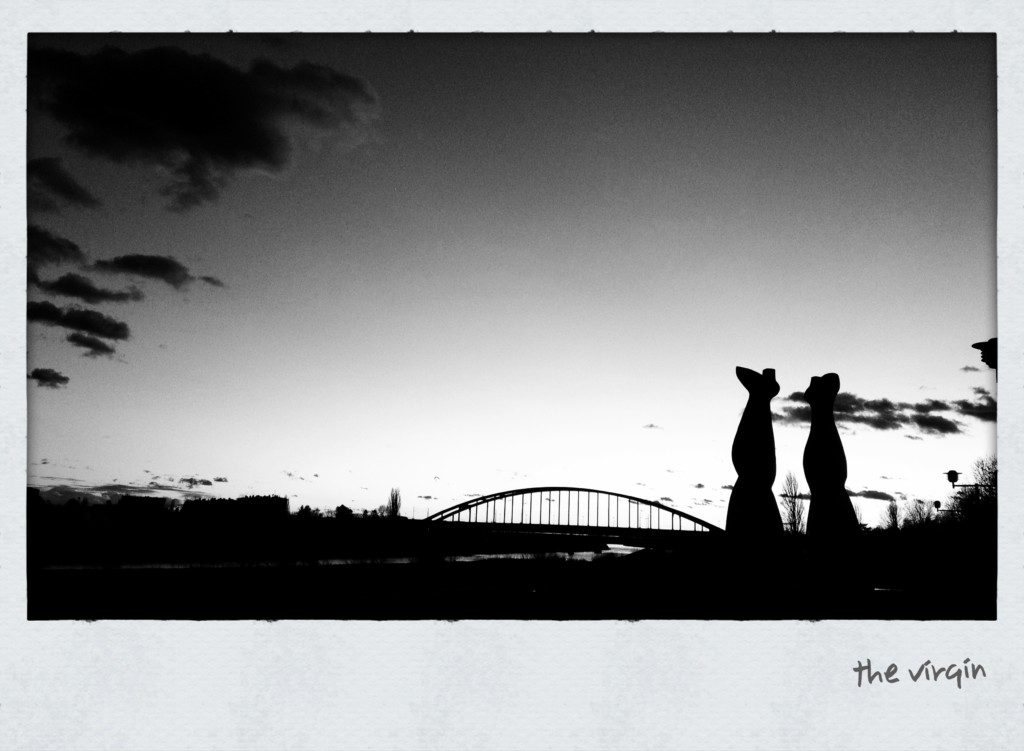