Tourist numbers seem to be a popular conversation these days, with major destination after major destination throwing its arms up and saying it can’t deal with the mass of people wanting to visit. Serbia and Bosnia & Herzegovina will be looking at this with a certain amount of incredulity, thinking ‘send them to us if you don’t want them!’. The two states at the heart of what was once Yugoslavia are two of Europe’s most invigorating republics, but the visitor numbers don’t come close to representing that.

If you’re looking to avoid the crowds and embrace a stunning mix of nature, history and culture, Serbia and BiH are for you. This is the best way to make the most of 10 days in the area.

Novi Sad is Serbia’s second city, the so-called ‘Serbian Athens’, but it still feels like an underrated and largely ignored destination. The town’s main square is a delight, the statue of Svetozar Marković stood in between the Catholic Church and City Hall, as an impressive array of cafes and bars hang around lazily in the background. Petrovaradin Fortress is one of the finest in the country, but it is the atmosphere of Novi Sad that really appeals. 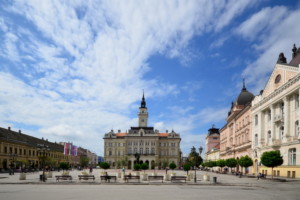 Speaking of atmospheres, we suggest heading into Bosnia & Herzegovina as early as day two to soak in the beauty of Banja Luka, the state’s second city. It has long been said that the most beautiful women in all of the former Yugoslavia can be found here, and we aren’t about the dispel that idea. This is the heart of Serbian culture in Bosnia, and it isn’t difficult to work that out. You could spend a quiet evening eating alongside the Vrbas river, but you’ll probably spend a loud evening in the bars and clubs instead. 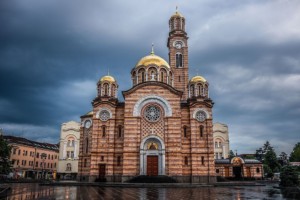 Head further inland on day three, to the central Bosnian city of Jajce. It was here that the second Yugoslavia was formed in 1943, but the town is best known for the iconic waterfalls that sit at its entrance. There isn’t a huge amount else to see, but when you’ve got the falls what else do you need? 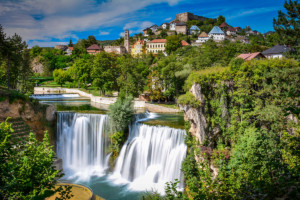 Okay, so in the introduction we mentioned a lack of crowds, but that isn’t true in the slightest when talking about Mostar. The jewel of Herzegovina is busy as anywhere else in summer, as masses of day trippers clog up the old town trying to get the best view of the bridge. More fool them of course, as the best view of the famous Stari Most is found from the beach in front of further away at Lučki Most.

Mostar was the most obliterated city in BiH during the war, and is still struggling to find its feet in a very divided political climate today. For tourists it is a dream however, and you’ll find plenty to see and do in Herzegovina’s biggest city. 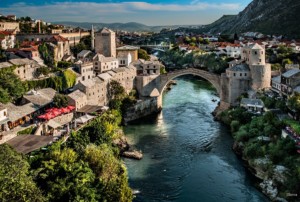 Mostar suffered more damage than any other Bosnian city during the war, but the misery inflicted upon Sarajevo took centerstage during those years of violence. The Sarajevo seen on the news is a world away from the Bosnian capital today however, which has blossomed into an energetic city with some of the best restaurants in the entire continent, let alone the region.

There are a number of tours of the city available, guided excursions that draw out every last story from the walls of the city and the surrounding hills, visiting the abandoned Olympic bobsleigh track or the tunnel that kept the city alive during the siege. 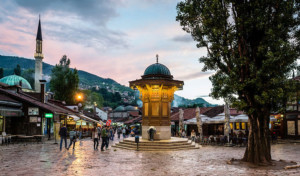 Bosnia is famous for a lot of things, and delicate bridges deserve to be nestled towards the top of that long list. There are plenty of bridges on the river Drina, but there is only one true Bridge on the Drina, and it just so happens to be on the way from Sarajevo back into Serbia. The Mehmed Paša Sokolović Bridge in Višegrad is second only to the Stari Most in Mostar when it comes to famous Bosnian bridges, and for good reason.

Višegrad is also home to Andrićgrad, an unusual construction that is half working part of the city, half theme park doffing its cap to the long, storied history of this part of the world. 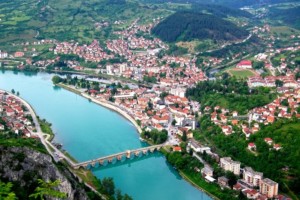 After all the excitement of the towns and cities, a day in the mountains is a good idea ahead of what will surely be a heady end to the trip. Luckily for you, Serbia’s most delightful mountain is just a short drive from Višegrad and the border between the two states, and nature in the country doesn’t come much more impressive than Tara.

The magnificent Uvac meanders are found on the border between the two countries, and the iconic House on the Drina is just over the border at Bajina Bašta. 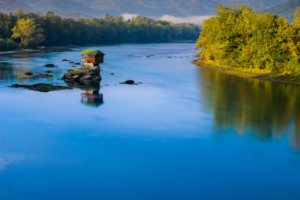 Day 8: Kraljevo and the Route of Kings

Niš and the south of Serbia offers the finest food in the entire region, but it might be a journey too far on this swift tour of the area. With that in mind, spend a day hopping from monastery to monastery in the area around Kraljevo, Serbia’s City of Kings. The leaders of yesteryear were coronated here, and the monasteries at Studenica and Žiča are two of the most important in this most spiritual of countries. 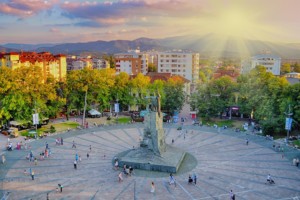 Two days simply isn’t enough to get the most out of Belgrade, but needs must and there isn’t a better place to bring a journey to an end than the regional capital. Spend the first day acclimatising to the chaotic nature of the capital, before feasting on some toothsome fare on Skadarlija. Cetinjska is a stone’s throw from the so-called ‘Bohemian Quarter’, and a night out in one of the most iconic party cities can begin.

The boats on the Sava and the Danube get a lot of press, but sticking to the bars and clubs of Dorćol and Cetinjska might be a better option. There is plenty of variation, affordable prices and a convivial energy, not to mention a lack of over-zealous bouncers.

With the hangover in tow, spend your final day trundling around the city taking in the various museums and galleries that Belgrade has to offer, stopping every now and then for a coffee in one of the million cafes that seem to line its streets. Head out to Zemun to experience the city within the city before nipping back to the old centre for more food and a quiet drink or two to bring the curtain down on a delightful journey. 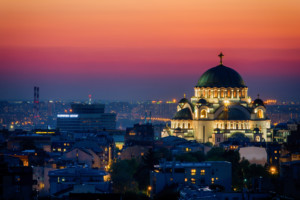