Zagreb Through the Eyes of Local Writers

Cities often act as backdrops to stories and novels. In fact, some cityscapes are so evocative that they themselves become literary characters. In which case, for example, you might want to read a novel only because it’s set in Paris. Zagreb’s literary persona is more subtle and more enigmatic. Yes, the city has inspired many iconic stories, but its literary influence also spills outside book covers. In other words, Zagreb writers have always been a crucial part of the city’s social life. They didn’t only describe Zagreb in their writing, they made the city into what it is today.

Get to know Zagreb writers
There has always been a deep bond between Zagreb and its writers. Not a flirtation, not fondness, but a real love affair. You can see that by the number of writers’ sculptures gracing the city centre. Follow the well-trodden sightseeing routes and you’ll bump into literary characters whose friendly presence reveals much about Zagreb’s history.

TIP: Go on a self-guided walk to see all the statues of Croatian writers in Zagreb – travelhonestly.com/croatian-writers.

To begin with one of the most defining moments is to visit poet Petar Preradović (1830-1879) at Flower Square. Born at the time of the Austro-Hungarian cultural dominance, Preradović recognized the value of writing poetry in the Croatian language. Without him, and other leaders of the Illyrian movement, Croatian would have never become a standardized language, worthy of literary expression.

Another literary pioneer stands at the busy corner between Vlaška and Palmotićeva streets – August Šenoa (1838-1881). Once the Illyrian writers paved the way for Croatian as a literary language, Šenoa took a step further. His goal was to reach the largest group of readers – women – so he specialized in historical novels which he fused with romance. The Goldsmith’s Treasure, set in 16th century Zagreb, depicts the clash between the nobility and the petit bourgeoisie. But the main characters, Dora and Pavao, are second only to Romeo and Juliet in their poignant, tragic love.

TIP: The English translation of the novel is beautifully designed in the shape of a gold brick and is stocked in most souvenir shops.

The character of Dora Krupićeva, carved at the Stone Gate entrance, is one of only two female statues in the Zagreb literary club. The other one celebrates Marija Jurić Zagorka (1873-1957) – the first woman journalist in southeast Europe.

Zagorka’s sculpture stands by The Sundial in Tkalčićeva street, as if to suggest that she was running ahead of her time. Indeed a trailblazer, this highly educated woman dared to leave her husband to turn to her writing career. Also unlike other women of her time, Zagorka ‘meddled’ in politics, especially to oppose the Hungarian Duke Khuen-Héderváry whose rule suppressed the Croatian language.

Her feisty spirit was in stark contrast to her Lilliputian size. And this combination was best captured when her fellow journalist Fran Supilo complimented her on her courage: ‘Little Zagorka, you’re a real man’.

The other side of Zagorka were her prolific romantic, historical and crime novels, for which she was often sneered at by literary critics. Those allegedly trivial novels, however, tackled some burning social issues. Like her famous Witch of Grič – a cycle of novels about the infamous prosecutions of witches, whose deeper message is to wake up to freedom.

Poet Antun Gustav Matoš (1873-1914) pursued freedom with the same passion, in writing as well as in travelling around the world. Though born in Tovarnik in eastern Croatia, Matoš was known as a big admirer of Zagreb. His statue on the Strossmayer Promenade is truly a joy to behold. It depicts him on a bench, enjoying one of the most striking views of the city. It’s hard to resist joining him and taking a selfie. As you do, here’s a little intro to your new friend.

Matoš was a military deserter from the Austro-Hungarian army. Fleeing Croatia, he spent his most creative years in European capitals and especially took to the Parisian café life. It was Matoš who introduced bohemian flair into Zagreb literary circles. Zagreb’s oldest café Pod starim krovovima (Basaričekova 9) and Palainovka (Ilirski trg 1) were his regular haunts. But this free-spirited loafing also ushered in literary modernism and symbolism. Poetic purity became his highest goal.

Following in the same vein was poet Tin Ujević (1891-1955) – undoubtedly Zagreb’s biggest nonconformist. Cafés and bars near Flower Square were literally his living room, because Ujević chose to be homeless. You can see his statue in Varšavska street, close to where he spent his days.

Ujević is one of the biggest lyrical figures of 20th century Croatia. His poetry, at once mellow and sombre, left a lasting mark on many generations. But this true bard didn’t suffer from grandiosity. In fact, Ujević mostly critiqued the bourgeois way of life and entertained the locals with things he did and said. Even today, there are Zagreb people who remember a few of Tin’s anecdotes from his favourite haunt Blato, now Tip Top (Gundulićeva 18).

Another 20th century literary giant is Miroslav Krleža (1893-1981), whose dramatic statue soars from the plateau at the entrance to Tuškanac forest. Given the vastness of his literary work that spans all major genres, Krleža’s role in Croatian literature can easily be compared to that of Shakespeare in England. He is also the only Croatian writer whose opus solicited an encyclopaedia of critical research.

Serious as his role sounds, Krleža’s writing doesn’t lack humour – or more correctly, satire. He was known as a keen observer of people’s behaviour, national mentalities and complex histories. Most of all, his sharp-tongued eloquence was directed at human stupidity and oppressive systems that lacked logic. In the English-speaking world, Krleža is best known for his novel The Return of Philip Latinovicz, with which he joined the ranks of the best Central European writers. 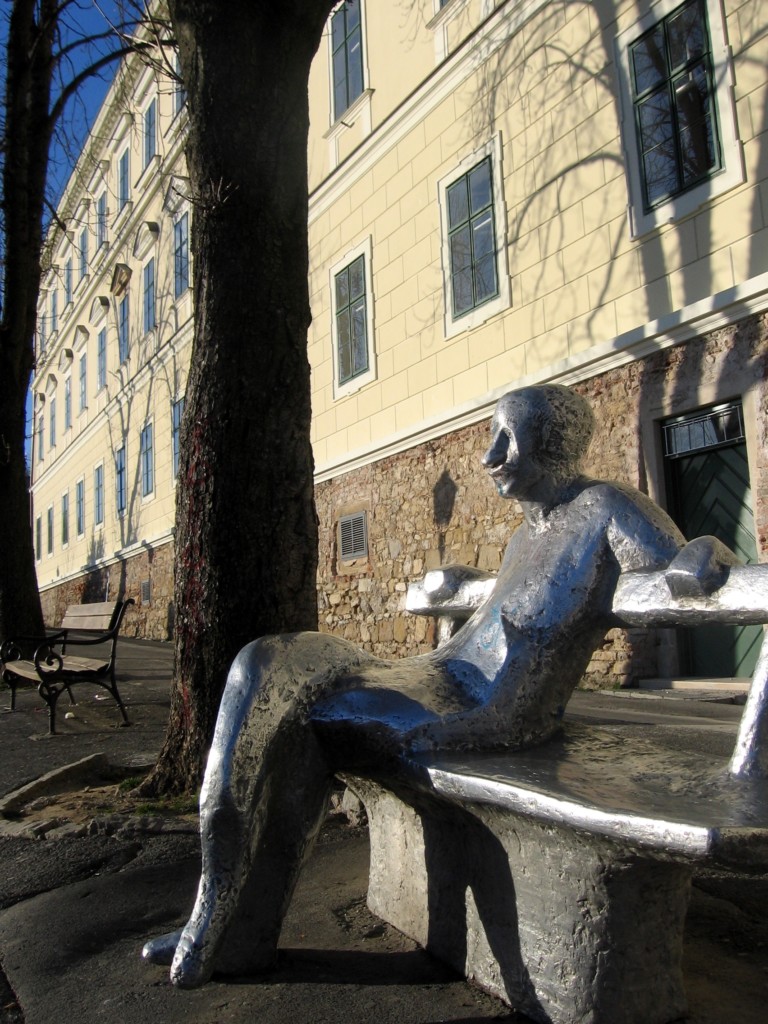 Hit Zagreb literary locations
The legacy of Matoš and Ujević, who turned Zagreb cafés into vibrant artistic hubs, remains to this day. The one where it all began around 1830 – Pod starim krovovima – is still one of the top literary destinations in Zagreb. Infused with old-world charm, the café hosts regular poetry and live music events and attracts a large literary audience.

Younger but equally bookish is K&K (Jurišićeva 5), which means knjiga i kava [book and coffee]. This dimly lit, two-storey café is filled with photos of old Zagreb and is a perfect hideaway from the bustle of Zagreb’s main streets. Locals often call it Milčec, after writer Zvonimir Milčec who opened and ran it for decades before he passed away.

Two of the most recent literary haunts are Booksa (Martićeva 14d) and U Dvorištu (courtyard of Žerjavićeva 7). Both have a great programme of events, including readings, workshops and creative writing courses. And unlike their older cousins, where one would go to drink and chat, these “new kids on the block” also foster a working environment. If you don’t have a coffee mate, simply take your book or lap-top along and enjoy their artsy space.

Aside from soaking up the literary buzz in cafés, you can also explore memorial centres dedicated to two Zagreb writers. Opposite the statue of Miroslav Krleža, there are steps leading up to Villa Rein (Krležin Gvozd 23) – a house where he lived for the last 30 years of his life. This is now the Miroslav Krleža Memorial Space (open Tue 11:00 – 17:00), a small museum where you can get a glimpse into his more private life which he shared with actress Bela Krleža.

Marija Jurić Zagorka also has her own Memorial Apartment at Dolac 8 (open Tue and Thu 11 AM-4 PM). The tiny apartment has one of the loveliest views of Dolac market. Zagorka really captured the mystical spirit of the Upper Town and many places that are now tourist attractions have featured in her novels. Think of that when you see the Lotrščak Tower or Bloody Bridge street which connects Radićeva and Tkalčićeva streets.

Meet Zagreb literary characters
Apart from Zagreb’s tragic lover Dora Krupićeva, the only other literary character immortalized into a statue is Petrica Kerempuh. You’ll find this popular jester just above Dolac market, in front of Potepuh café – another hub for the brainy bohemians. Created by Miroslav Krleža, Petrica epitomizes the local attitude to life’s struggles and turns even the gravest situation into a joke.

And when it comes to approaching problems with humour, Zagreb has had its own Bridget Jones character before this witty female won over the world. Štefica Cvek, the heroine of In the Jaws of Life by Dubravka Ugrešić, is an endearing, smart woman whose love adventures are packed with laughs and local colour. The book is also available in English.

Some Zagreb micro-locations became famous through works of literature and television. Such is the working-class neighbourhood of Peščenica, a setting for the famous book and TV series Smogovci. Created for children, but universally loved, this story about six brothers captured people’s hearts across Croatia. Peščenica was also home to Croatia’s famous maverick traveller Željko Malnar, remembered for his anti-TV show the Nightmare Stage. The show was based on his satirical project The Republic of Peščenica – a critique of totalitarian systems and their dictators.

We’ve mentioned writers and characters that grew out of Zagreb. In all these stories Zagreb plays a supporting role. But there is a genre where the city takes the spotlight and turns into the lead character. Starting with Šenoa and his Zagreb Sketches, every new generation produced a wonderful work of vignettes that portray the city and its cultural vibe. Zvonimir Milčec, Antun Šoljan and Veselko Tenžera, to name a few, devoted pages upon pages to the city that made them. It makes us wonder if unassertive cities like Zagreb are actually the most inspirational for creative, bookish types.

Nikola Tesla – Mind from the Future