Underdog 2017 dog and owner swimming race – from the audience

This summer I spent three weeks during August in Crikvenica. This resort on the Kvarner coast south of Rijeka is known, among other things, for its dog-friendly beach which opened a few years ago and which has a rather special cafe offering treats such as ice cream and beer especially for our furry friends.

It’s in a beautiful spot near the place where I was staying, somewhere I would only take a stroll to however since I don’t have a dog, I bathed somewhere else and so I only glimpsed from time to time the dogs and their owners enjoying their little spot, surrounded by other dog lovers.

But I have two small children 🙂 , and on that windy Sunday towards the end of the month an event like the Underdog 2017 race for dogs and their owners sounded like something which might be fun for parents and children to enjoy together. To be honest I didn’t expect much, but with children in tow who were already bored of the sea, on a day with the north wind howling this gave me hope of salvaging the evening.

And luckily, it exceeded expectations! If I had a tail I would have wagged it just like all of the dogs that came, large and small, shaggy and short-haired. I could not have guessed what the start would have looked like, how the race would unfold, which direction it would take… We arrived just in time for the start, the countdown when the owners, mostly men and just a few women, ran down the ramp into the sea at the end of the jetty. Some had their pets in their arms, others had their dogs by their sides and they started to jump into the sea which was foaming, with big waves and I didn’t think that anyone would be able to start off, let alone swim across that little bay. It didn’t go very smoothly for everyone, but they put up a good fight.

We ran back to the beach where everything was ready for a great event. Food awaited on high tables, a girl with a beautiful voice sang accompanied by a guitar, photographers and TV cameras all around. Wonderful cakes, of which one was especially for the dog race, who would be first to gobble up their slice, and the other for all the human participants in the event. 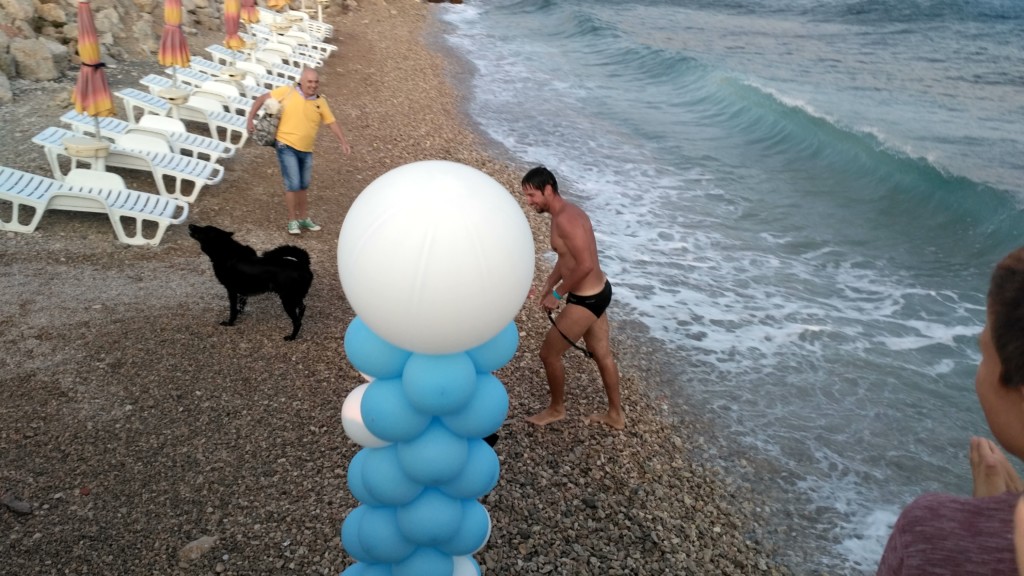 We headed for the beach where everyone was waiting for the competitors. We saw the first pair arriving, the adrenalin and the euphoria was palpable and rising with the buffeting wind and with every wave, which threw out the winners, Marino Bogdan and his dog Nimbus. I clap, sort of, while holding onto the girls so they wouldn’t fall off the rocks, and try to take pictures and catch a little of the atmosphere rather than enjoying myself, but I too am subject to the laws of social networks.

As the pairs arrived, the atmosphere became better and better. Interviews were held, congratulations showered, great fun. We showed our support with clapping and cheering until the very last pair. The sun was already setting, people were preparing for a competition in drinking beer and eating cake and ice cream. All for dogs, of course! It became so crowded that the children could no longer see so we took our piece of cake and moved to a quieter spot. We also took a figure of a pug made of marzipan as a souvenir. 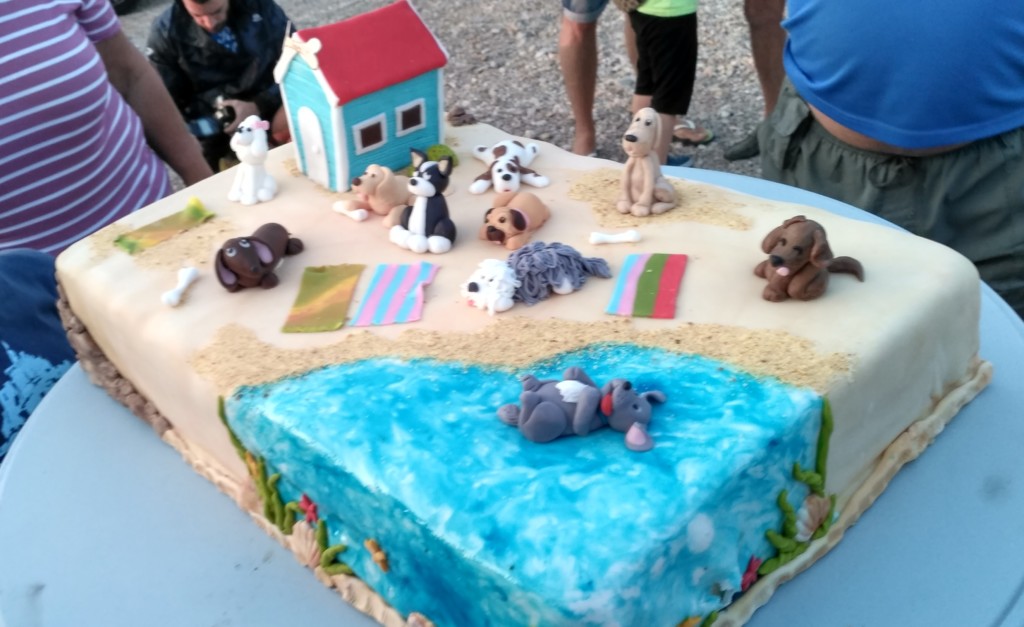 The cake was tasty even though, with a little help from the wind and from tiny two-year-old hands, it fell on the ground, to the despair of my six-year-old. But that gave us another reason to come back next year and do the cake justice J

Have a look at these photos on Stilueta  where you can get a sense of the atmosphere.