A parade of Carnivals!!!

The flair, the glare, the excitement and the dazzling costumes are just some of the elements we consider to be a part of any carnival. Well, behold, dear readers, as your traditional carnival in Croatia includes not only these glittering essentials but also something different, something spooky, something quite hair-raising, in fact. You may be scared right now but let us tell you that this is a great time to be in Croatia, as you can join the locals in scattering evil ghosts and releasing a year’s worth of frustrations all under the cover of fancy dress. This is, indeed, taken to be the norm, a ritual intended to cleanse your soul before the warm season of spring arrives. You see, carnival season is connected with ancient traditions from these areas that go back to the Middle Ages. According to Slavic pagan customs, carnivals would begin closer to the beginning of the year when locals would parade the streets, marching and cheering, they’d attend masquerades, fancy dress balls, wear costumes and sing to drive away evil spirits. This would carry on all the way to Shrove Tuesday, the day before Lent – the time of fasting, a time of moving away from our wrong doings and preparing for Easter. Quite often the final day of celebrations finish with the ceremonial judgment of an imaginary character blamed for everything bad that has happened over the past year. In the Zagreb region this individual is styled on a prince and is named the fašnik, though his moniker is different in other parts of the country. But wherever you go, he is the one who represents all our problems, troubles and miseries, who takes the blame and is then symbolically burned in a blazing bonfire. A little harsh, you say? Not in the least! Nowadays, carnivals around the country intertwine the customs of old with the fun and glamour of the present day. Everyone is welcome as the carnivals include all generations, with some wholehearted devotees preparing for the show all year round. You’ll see the evidence of this in the magnificent costumes that are worn, some traditional and others so wacky that they would make fashion designers dance with glee.
Most of the carnivals take place at weekends and consist of a plethora of activities ranging from masquerade balls, carnival parades, exhibitions, tours, sporting events, dandy rituals and other celebrations. Needless to say, the amount of food and drink consumed at such events is astonishing, but at least you get to taste an array of gastronomic delights. Every region has its own customs, so wherever you happen to be, why not join in the fun, embrace the spirit of carnival and experience it in a unique way. Let’s get an insight into what’s happening and where…

In and around Zagreb

10 – 11 February: Living Pictures in Zagreb City Museum
Reinvigorate the past! Relive some tales of Old Zagreb during the last weekend before Lent at this costume party held at the Zagreb City Museum. Don’t be surprised when you come across some famous characters from the city’s earlier period who will tell you their own stories.  www.mgz.hr 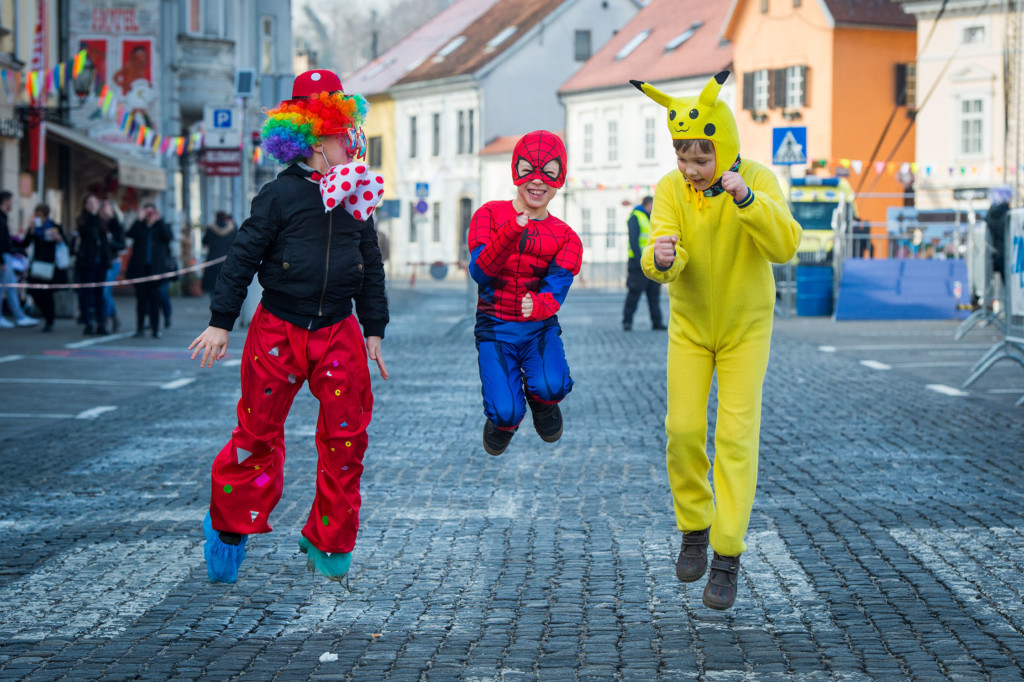 The idyllic little town of Samobor is just a few kilometers away from Zagreb and has one of Croatia’s most popular and longest-running carnivals. Festivities begin on 2 February and run through to 13 February. Good old Prince Fašnik is blamed for all the misfortunes in the region and is of course punished by being burnt in a bonfire. It’s witty and political as there is a judge and lawyer who defend the Prince by satirising current affairs in a highly humorous way. There will be food and mulled wine on the square, competitions, fancy dress parades, a costume ball – and lots of wild behaviour!
Samoborček buses leave from the Zagreb Bus Station, Črnomerec and Ljubljanica every 20 minutes, departures begin in the early morning from 05:00 through to 22:00 or 23:55. There are no night bus lines, however come Friday and Saturday evening, the buses ride all the way to Podsused where you can catch ZET night city transport. A one way ticket will set you back between 22 and 25 kuna. For further information, visit the Samobor Tourist Office at Trg kralja Tomislava 5, tel. (+385-1) 336 00 44, www.fasnik.com

Zagreb’s little neighbouring town of Velika Gorica is celebrating its 109th anniversary and the town is set to transform into a Carnival paradise. Sunday, the 10th February is Grand Carnival Day and it sees the grown ups’ parade starting at 14:00 and the judging of costumes, winding up with live concerts with local bands performing in the Carnival marquee in the Dr. Franjo Tuđman park in the evening.  ZET buses (line 268) ride from the main bus station every 10 to 15 minutes, whilst night lines ride every hour. A one way ticket costs 20 kuna with the driver or 16 kuna if you purchase it at a kiosk. www.tzvg.hr

In and around Rijeka

By far the biggest and most popular carnival of all in Croatia! In fact, according to the Sunday Times Newspaper, the Rijeka Carnival is one of the most exotic of these world events that happen at the beginning of each year. This sea-side city has a chill in the air at this time of year, but the carnival traditions that date back to the Middle Ages certainly hot things up. The Rijeka Carnival has become an international event with over ten thousand participants and more than a hundred floats and carts from dozens of different countries. By the time you read this the fun will have started on 17 January with the handing over of the city keys to carnival authorities. But the best is yet to come as proceedings continue till 14 February. The Children’s Carnival parade had the cutie-pie factor, while the International Parade is nothing short of spectacular with over one hundred thousand people attending on February 11. The traditional costumes from the local area are spectacular, so do head down to the coast and indulge in the chance to enjoy a cup of coffee in the winter sun. Don’t let distance deter you from coming as the trip from Zagreb now takes under two hours by car thanks to the new full Zagreb-Rijeka motorway; buses take 2-3 hours and trains rather longer. See the official carnival homepage www.ri-karneval.com.hr for further details. 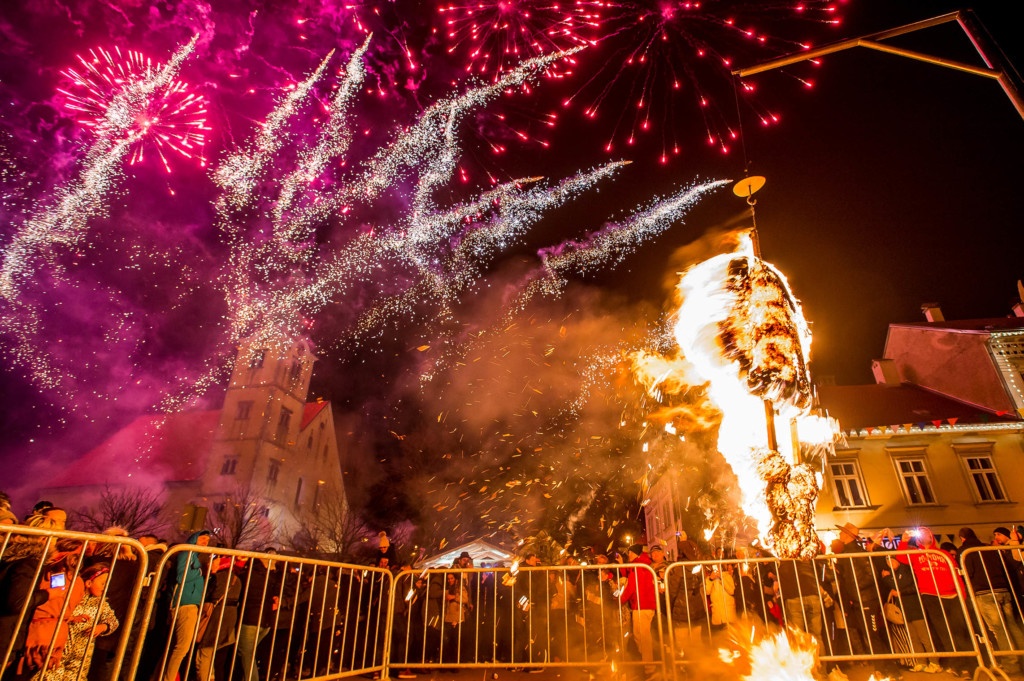 Our islanders are also no slackers when it comes to knowing how to party, so whilst you’re in Rijeka why not hop down to the island of Pag for their carnival. This takes place on the six weekends leading up to Lent. There’s a masquerade ball every Saturday until events culminate on the weekend of the  11 – 14 February. Witness traditional dances, in particular the Paško kolo folk dance, see the famous folk costumes and join in on the masked parade for that element of surprise. It’s held outdoors on the main Petar Krešimir IV Square, and you can also dig into the great hot food and homemade delicacies on offer. Simply jump onto the Jadrolinija ferry from Prizna or the catamaran from Rijeka.

A little closer to home, the town of Crikvenica is just a half-hour drive heading south from Rijeka. Here, the locals lay on seven weekends of fun with events taking place every Saturday until 14 February. There’ll be a big marquee on the Petak car park next to the bus station, where you’ll be able to catch performances by stars from the Croatian light entertainment scene. Apart from that, events will include two carnival parades (one featuring local groups and their guests and another for children). Check out www.maskare.net for a complete programme of events for Crikvenica and the surrounding area. To get there, take a local bus from Rijeka or one of five daily lines from Zagreb. The trip by bus from Zagreb takes 3-4 hours (stopping service), while by car you’ll be there in two hours.

The notorious antics that happen at carnivals continue at the coastal town of Zadar, where kings were once crowned, and now carnival reigns from 06 – 11 February. The main events will be held between 11:00 and 13:00 in the center, around the main square and Kalelarga, the main street in the Old Town. On Sunday 11 February in the afternoon, carnival parades attract participants from neighbouring areas and the surrounding islands of  Zadar County.

Further south and off the Dalmatian mainland is the island of Lastovo where you’ll see a carnival that pays particular respect to history. The carnival is named the Poklad and legend has it that it dates back to a time when the island was attacked by Catalan pirates. After praying to Saint George for deliverance, the islanders were saved, and they have commemorated the event ever since. Sounds victorious!
Festivities begin on 17 January with a grand opening of the dance hall which will be the scene of a ball every Saturday. All are welcome, in fancy dress or regular attire. Events reach their peak on the fabulously named “Obese Sunday and Monday” – the days before Shrove Tuesday. Sunday is the date dedicated to fun for the children, and on Monday a dummy of the Poklad – a Catalan pirate is made. On Shrove Tuesday 13 February this unfortunate fellow is sent flying on a ripwire from a peak above the town, fireworks cracking at his heels. Humiliation indeed. You’ll witness locals in decorative traditional costume and have the chance to take part in an egg hunt. See www.lastovski-poklad.hr for further details.

If you’re travelling further south, there are carnival festivities in and around the medieval city of Dubrovnik:  05 – 13 February
This Medieval City is the perfect setting for ‘masked parades’ and ‘masquerades’. Come and join in the carnival atmosphere, there are carnival art installations, a Captain’s Ball, children’s dress up parades, opera, photo exhibits,  workshops and more. So for fun, flair and a fiesta, Dubrovnik has much to offer. www.tzdubrovnik.hr