Croatian Cultural Dictionary: 13 phrases that can’t be translated, only lived

Learning a foreign language is not only a linguistic adventure. Whichever language you choose, climbing the ladder of proficiency unfolds in almost the same way. Everything is great while you dabble at the beginners’ level and the words have their exact equivalents in both languages. Grammar, phrasality, pronunciation, all this awaits a few rungs up. Master it and you can actually speak the lingo. The biggest challenge, however, is getting entangled in the web of (obscure) cultural concepts – a treasure revealed only to the advanced students.

Croatian business conversations
This subheading may sound misleading because the concepts that follow are everything but action-packed. Read on and you’ll unearth a peculiar quality in the Croatian attitudes to work: ‘easy does it’ is our local version of the Taoist wu wei principle (doing without doing).

1 |Tribalo bi, a Dalmatian version of trebalo bi, literally means ‘one ought to’. Yes, it’s important to emphasise the subject-less state of this expression. No one really knows who this one is, which is both polite and convenient. Let’s say a wife says to her husband ‘tribalo bi iznit smeće’ [one ought to take out the rubbish], she is politely nudging – the husband, of course. He can simply reply: ‘ah, tribalo bi’ [one ought to,indeed]. He registers the need for the task but he hasn’t made any promises. He’ll do it but not just yet. A more brusque version of tribalo bi is used by speakers of other dialects when they want to convey sarcasm. For example, it’s been months and those boxes in the basement are still waiting for your attention. ‘Tribalo bi’, you exhale, knowing well you won’t get to it any time soon.

2 |Kako ćemo – lako ćemo translates as ‘What shall we do? We’ll manage’. It’s a warm, reaffirming attitude that you would use to soothe a friend in distress. Saying this reminds them that every problem has a solution, and that it usually shows up after a few drinks – when you let go. In this context, ‘the managing’ reduces stress. However, you can find yourself on the (stress) receiving end too. Imagine your work depends on the promptness of others. Those others that just took a beer break to blow out the steam. Now, this laid-back letting go is rubbing you the wrong way up. If you try to speed things up, you’ll just get the same wisdom recited back to you: kako ćemo – lako ćemo. So chill, everything will eventually get done, with or without you stressing.

3 |Uhljeb, a single word that explains many Croatian paradoxes. Its stem, hljeb, is an archaic word for bread, so a broad translation would be ‘a person whose daily bread is secured for good’. Now the question is: how is this even possible? It is, because an uhljeb makes it so. Usually through political or family connections, an uhljeb will find a cushy, well-paid job where minimum work effort is required and the assessment of efficiency is almost non-existent. To an uhljeb, this is crucial because they are either slacking off or not the right person for the job at all. Here’s the paradox: an uhljeb will never call themselves an uhljeb. It is the people around them who whinge about uhljebs, which brings us to another peculiar phenomenon: complaining (at all costs).

4 | Jamrati comes from the German ‘jammern’, which means to complain, moan, lament. Although the verb is more common in continental Croatia, the activity is popular throughout the country. Jamrati has a specific quality to it – it’s complaining for its own sake. If a local begins to moan about something over coffee, don’t try to offer solutions to their woes. The purpose of jamrati is to deepen the bond between the speakers. Someone may jamrati to you about losing a job to an uhljeb, in which case the appropriate reaction is to just listen and agree. Empathise, take their side, but refrain from offering a constructive solution. The camaraderie forged through jamrati is one of the strongest and can even result in professional benefits.

Croatian leisure talk
Croatian people value their free time and they love sharing it with family and friends. When foreigners see so much lounging around, they immediately assume Croatians are lazy. This is far from the truth. Croats just have a good life-work balance underpinned by a few crucial attitudes.

5 | Tko to može platit‘ meaning ‘who can pay for this’ is usually exclaimed when someone is moved by an extraordinary experience. This can be as simple as a glass of wine during an especially beautiful sunset. What most Croatians believe is that some things/experiences cannot be bought, which is in stark contrast to the Western slogan that ‘everything has a price tag’. Having time for your friends in the middle of the day is a tko to može platit‘ experience. And this is precisely what creates a healthier and more meaningful outlook on life.

6 | Kafenisati means much more than ‘to drink coffee’. Of course, a cup of coffee is the start of this ubiquitous ritual. But everything else that happens during and around it is what makes kafenisati our precious social glue. First off, Croatians always have (or make) time for coffee. It might seam they’re skiving off from work, but lingering over coffee can also serve to advance one’s work. This is how new contacts are made and the existing friendships are nourished. Remember the importance of jamrati [to moan]? Now do it together with kafenisati and you have a winning combo for expanding your social capital. For the complete insight into the Croatian coffee culture, go to https://travelhonestly.com/croatian-cafe-culture/. 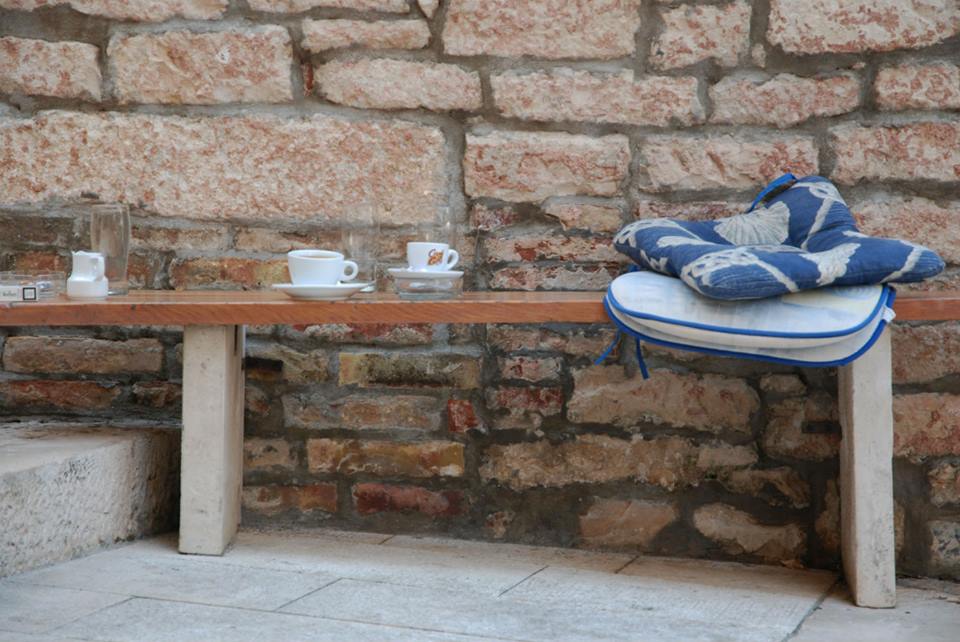 7 | Duditi is quite the opposite from kafenisati. While coffee dallying is a goal-oriented behaviour (even if it doesn’t seem so to an outsider), duditi really is the ultimate expression of non-doing. Weshare this life-enhancing skill with our Italian neighbours – masters of the sweetness of doing nothing. If you think this is an easy undertaking, try duditi for one whole weekend. Loaf around the house, chuck away your to-do lists, empty your inner and outer world from distractions. It’s a mammoth achievement, isn’t it? This is why duditi is so beneficial for both your mind and body.

8 | Pomalo is a real subversion of the modern day rushing around mentality. Literally, it means ‘step by step/slowly’ but exercising the pomalo attitude is almost a supernatural act. Here’s why. In the West, people are told ‘time is money’ and to be/appear busy is a sign of success. When Croatians do things pomalo, we are defying these values, and effectively, we are slowing the time down. It may sound far-fetched, but pomalo is the Croatian time-travel machine.

Croatian weather talk
Weather talk in Croatia is simply weather talk. While in Britain, chatting about overcast skies or sudden drizzle has a deep social purpose, the one of breaking the ice with strangers, Croats will talk about the weather only when it really bothers them. Of course, bear in mind that ‘troublesome’ weather is not simply a meteorological matter because nations perceive climate in a cultural way too. Which is to say that ‘warm’ in Croatia is not the same as ‘warm’ in Scandinavia.

9 | Fjaka could be compared to the Spanish concept of siesta. It’s the same Mediterranean climate with hot and sunny days that makes people sleepy in the afternoon. This is why a day in Dalmatia starts very early (to avoid the heat), falls into a mid-day lull called fjaka, and picks up once again in the evening. Meteorologically speaking, having an afternoon nap – indulging in fjaka – is justified. Culturally, however, fjaka can be a minefield. It can be an excuse for laziness, or a justification for inefficiency. Ultimately, it’s a state of mind similar to the polako attitude. And because it’s so deeply rooted, the only way to deal with fjaka is to learn how to ease into it yourself.

10 | Južina comes from jugo–a strong south-western wind that frequently blows at the Croatian coast. While jugo is simply the wind’s name, južina denotes all kinds of negative influence that jugo has on people. This can be a mild headache, or a complete meteoropathic breakdown. During a strong and long-lasting jugo, the effects of južina are felt all over Croatia, not just the coast. Radio stations will issue warnings to weather-sensitive people who can feel disoriented or experience backache or muscular pain. If you ever witness a bad case of road rage, you can be sure this is a product of bad južina.

11 | Propuh means draught – innocuous all around the world but in Croatia guilty of all kinds of ailments. Croatian propuh is a perfect example of how even illnesses are defined by our culture, not only microbes. Croatian children are raised to fear propuh because it can cause a headache, earache, sore throat, even a full-blown flu. Mothers scream and scold you if you have car windows on opposite sides open. And when they send you off on a trip, their instructions will include a warning not to get caught in propuh. Croatian people don’t really have much choice but to stay away from the horribly dangerous draught.

Most important ‘empty’ talk
We use words and phrases to communicate some kind of information – from basic facts to complex emotions. But languages also consist of another type of expressions – let’s call them fillers. These words are widely used and repeated by the natives, but too often forgotten by the foreigners. Why? Because omitting them doesn’t change the meaning of the sentence, but it certainly affects the tone of the talk. So here are two Croatian fillers. Learn to use them and you’ll sound as native as it gets.

12 | Fakat translates as ‘really’. It’s one of the commonest fillers in continental Croatia, especially Zagreb. For example, ‘Fakat sam gladna’ [I’m really hungry]. But it can also be used to ask a question or to confirm what someone just said. It’s fakat cold outside. Fakat? Fakat.

13 | Ajme is so widespread in Croatia that many people don’t even know its etymology. It comes from the Italian exclamation ahimè and is used whenever you’re caught by a strong emotion and left speechless. Oh dear could be its rough translation but ajme is especially effective during one of those jamrati sessions. Remember, when someone chooses you for their complaining partner, they think of you as a friend. Don’t fix what’s bugging them. Instead, repeat ajme as much as you can to show empathy. Nothing sounds more Croatian than doing this grumbling – ajme-ing back and forth.

The Intriguing Status of Prostitues in the Dubrovnik Republic