Totally guilty here. I’ve been in Krakow for more than a while now and I’ve never been to the salt mines in Wieliczka or to skinny-dip in Kryspinów. I actually only visited Auschwitz after five years of being based here. To be fair, isn’t that what being a local is really all about? … Perhaps not. Why is it that we (consciously or unwillingly) neglect the beautiful places and historical sites that our chosen cities have to offer? Is this a global phenomena? Job, family, friends, time, excuses. Anyway, I’m going a bit off tangent here.

Thankfully, today I can cross a place off of my to-check-out list. I would never have stepped into that red-brick building on Aleja or learned anything about the craft of stained glass if I hadn’t been prompted (read: pestered) by a friend who works at the Stained Glass Museum in Kraków. Definitely worth checking out!

Not only is the production of these colourful light refractors itself a quasi-alchemical process, but the intimate relation it holds with artistic and sacral heritage is one that we can appreciate in the city. The building that holds the stained glass workshop since 1902 also has a unique architectural value, since it was erected with this particular purpose in mind. Large windows facing north, for instance, provide the right amount of light so artists can come to the painting studio at any time during the day. A tall cubic chamber located in one of its wings can hold a large stained glass against a window to test its quality.

I was lucky enough to walk around the premises and learn a few facts about the mind-boggling techniques used in what is now considered not only a craft, but an art. Not all stained glass is naturally coloured, and the process of painting and shading involves as much patience as technology. Cobalt is used for blue, and gold for the red colour powders (grounded glass combined with other metallic elements) that tint the glass. Details of faces or hands have to be painted into the inner surface of the glass, which at times requires several layers to achieve the desired effect. This process is done using a sort of sun-bed (solarium) that heats up the glass to the right temperature until the painting permanently penetrates the crystal. Quite the piece of computer-based technology, but imagine that back in the day coal ovens where used instead, which implies an acute sense of stovemanship. Despite being poisonous, but due to its malleability, lead is used in the interstices between the fragments of glass to assemble them and at times become an essential part of the entire design.

While perusing around the workshop my friend drew my attention to this opaque stained glass pattern of the Virgin Mary lying on a thick wooden table. With a coy smirk she lifted it and placed it against the window. I couldn’t believe my eyes when I saw her staring back at me in all its coloured, light-bending splendour. It was then that I grasped the earthly-ethereal dichotomy at play: a man-made object transfigured by the divine properties of light. It is not until showered in light (touched by grace) that the stained glass is cleansed and becomes whole.

Some stained glass sites in Krakow

Krakow In Your Pocket 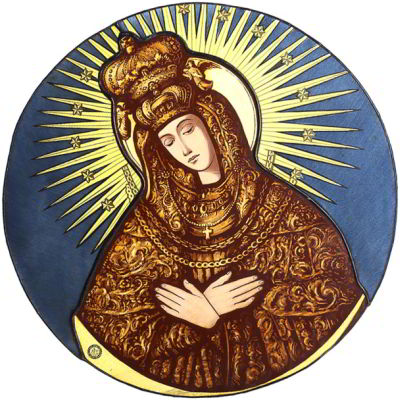